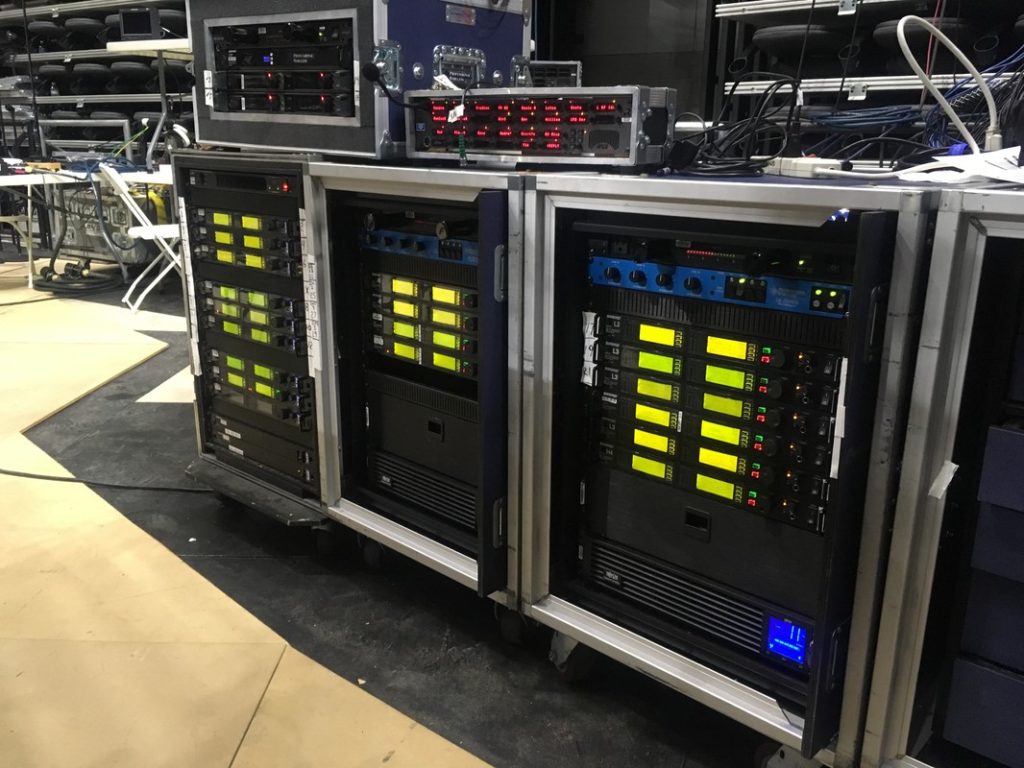 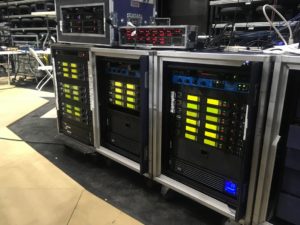 Equipment used for the main show consisted of 30 channels of Shure UHF-R, two channels of Shure Axient for Jennifer Lopez’s performance as well as for the director’s talkback mic, four channels of Sennheiser EM 3732- II with SKM 5200-II handhelds, and an assortment of microphone capsules that included Shure KSM-9s, KSM-8’s, BETA® 87Cs and 98H/Cs, and Neumann KK 104-S’ and KK 105-S’.

Radio Active Designs UV-1G wireless intercom system was used to provide 34 drops of intercom and Telex BTR-800 systems with TR-825 packs were used to provide 28 drops. PWS provided a custom antenna distribution system to allow for the broad coverage of wireless intercom to reach several different zones throughout the venue. In addition to production comms, PWS also covered the talent IFB’s with eight packs of Comtek PR-216’s and another 20 packs of Sennheiser G2’s for listen-only program. Additionally, 16 channels of Shure PSM 1000 in ear monitors were provided by Univision. 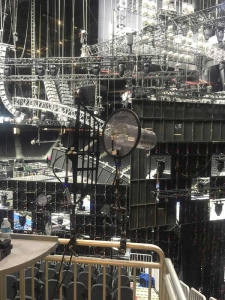 The live broadcast used many of PWS’ well-known antennas, such as the PWS Helical and Domed Helical antennas. These provided the coverage needed for the microphones, intercom, IFB and in ear monitors. In total, there were 170 frequencies in use for the main show.

“A major challenge on this type of event is providing wireless intercom coverage over a large area,” says Gary Trenda, RF PL technician, Professional Wireless Systems. “The specialized equipment provided by PWS is what makes this possible. We’re using a combination of PWS DB-IC and DB-IC2 filtered receive multicouplers, along with PWS GX-8 and RAD TX-8 transmit combiners. We’re also deploying PWS Domed Helical antennas and RAD VF-1 VHF directional antennas. By setting up multiple antenna zones, we’re able to extend coverage beyond the main area to the multitude of back of house staging areas.”

Not only did the main show have a significant amount of RF that needed to be monitored and coordinated, but the pre-show red carpet event consisted of separate production and microphone frequencies, all of which had to work alongside the main show’s equipment. PWS provided a Clear-Com FreeSpeak II™system for the pre-show event, which consisted of an Eclipse HX-Delta frame, 24 beltpacks and 13 antennas. Multiple Lectrosonics IFB and Shure UHF-R kits in various band splits were supplied by Univision. Frequency Coordination Group provided the antenna distribution system.

Brooks Schroeder and Chad Meise of Frequency Coordination Group were enlisted by Univision as lead coordinators for the preshow event and worked to ensure there was no interference on the red carpet. “Besides the normal challenges of a live multinational broadcast, having two separate shows running at the same venue provides a very specific set of challenges,” said Schroeder about the show. “Thankfully with the long-standing relationship that Frequency Coordination Group and PWS share we were able to provide Univision a successful event.”