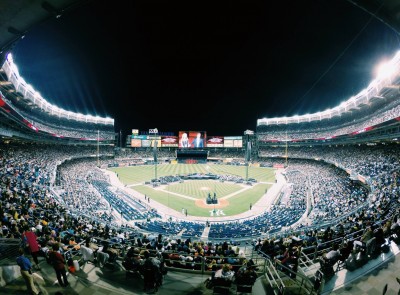 America’s Night of Hope, with Joel and Victoria Osteen, kicked off its 7th annual event this year in San Francisco’s AT&T Park. Out front a packed stadium greeted the mega-church pastor and his family with thunderous applause, while behind the scenes Professional Wireless Systems (PWS) was on site providing frequency coordination, backstage communication and event support. PWS successfully integrated Joel Osteen’s wireless equipment together for rock-solid coordination within one of the nation’s most congested RF cities.

The spectacular event, Night of Hope, is an inspirational experience meant to bring people together in an environment of encouragement, belief and worship. The two-hour event delivers heartfelt words of encouragement from Victoria Osteen, a special testimony from Dodie Osteen, and concludes with prayer and an inspirational message from Joel Osteen.

This year, PWS managed 70 frequencies site-wide. The Radio Active Designs (RAD) UV-1G system was on hand this year and was a valuable asset in clearing the spectrum of communications to make room for mics and in-ears. San Francisco is one of the nation’s most congested RF areas with an abundance of DTV stations in close proximity to each other; creating the potential for spectrum lockdown PWS’ frequency coordination was paramount at the AT&T Park stadium to ensure an interference-free event.

Along with coordination, PWS also supported all wireless gear provided by Joel Osteen’s audio production team. The equipment, from Shure, consisted of 24 microphones and 14 in-ears. John Garrido, the lead RF coordinator during the event, organized all gear in such a manner that the Osteen’s had complete freedom of movement during their services and the ability to convey their messages without delay.

“Working in a major metropolitan city like San Francisco, it is important that we are able to have clear communication for the onstage talent,” says Jim Van Winkle, general manager of PWS. “John Garrido did an excellent job of coordinating the frequencies, securing a pathway to ensure that there was no interference or signal problems. The evening was a resounding success.”