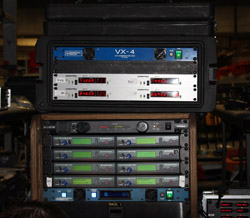 One of the challenges faced by lead RF coordinator James Stoffo and wireless intercom technician Gary Trenda was overcoming interference from the stage’s many video and lighting walls.

“Awards shows are continuing to use several large video and lighting walls to create enhanced effects while the talent is performing on-stage, which commonly transmits RF noise onto the in-ear monitors,” says Jim Van Winkle, general manager of PWS. “This is problematic for live performances as the artist needs to be able to hear themselves clearly through the in-ear monitors.”

To address this, PWS ran the in-ear transmit antennas under the stage, instead of backstage, in order to get as close to the artist as possible and successfully block out incoming interference from the video and lighting walls.

“I chose the PWS domed helical antennas for this because I needed to be working with antennas that were circularly polarized and had a nice, wide pattern to cover the whole stage,” says Stoffo. “Additionally, the Shure PSM 1000 personal monitor systems have an automatically adjustable amp that, paired with the antenna, has the ability to push the noise from the video walls down, which is crucial in this application.”

PWS supplied an equipment package that included Shure UHF-R wireless microphone systems, as well as Sennheiser systems to accommodate those artists endorsed by Sennheiser. Two PWS helical antennas covered the wireless mics on stage, one stage left and the other stage right.

All of stage managers and the audio team utilized Radio Active Designs (RAD) UV-1G wireless intercom system with “RAD pack” beltpacks, with COMTEK BST-25s utilized for the talent IFBs. Both of these systems operate in the VHF spectrum, which proved crucial during the main show performances.

“It;s important to free up as much space on the UHF spectrum as possible,” Van Winkle says. “Having several comms and IFBs working in the VHF band allowed us to smoothly fit the audio mics and in-ear monitors on the UHF band, which need to be operating within that spectrum for its higher audio quality.”

PWS managed the show’s frequencies with its own Intermodulation Analysis System (IAS), as well as one of its 36-channel monitor listening stations. Stoffo used the station to monitor all the microphones, as well as select intercoms for the duration of the evening’s array of performances.

“I would like to thank the PWS team for a job well done and another successful show,” Van Winkle concludes. “On shows of this magnitude, there is always the potential for last-minute problems to arise with how congested the RF landscape has become. Our team has to react quickly, changing certain frequencies last-minute to keep everything operating smoothly. Thanks to all involved in this show’s execution for another successful year.”