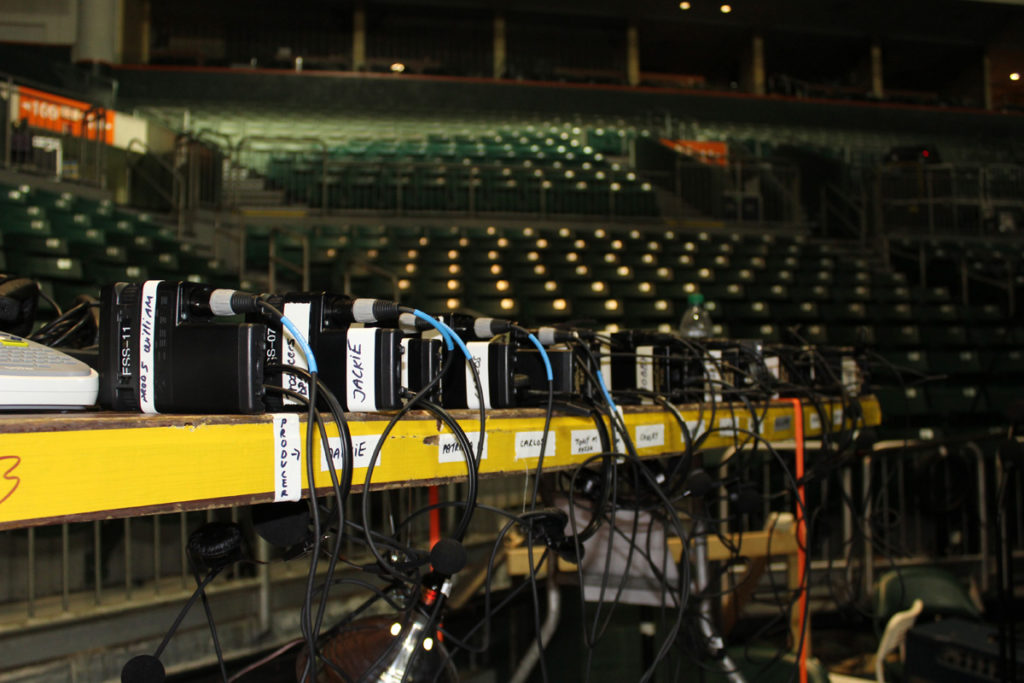 MIAMI, MAY 14, 2015 — When the 2015 Billboard Latin Music Awards Presented by State Farm® hit the stage on April 30 at the Bank United Center at the University of Miami, Professional Wireless Systems (PWS) once again supported Telemundo’s live broadcast, providing wireless solutions and equipment to ensure an interference free, star studded spectacular.

For this year’s event, PWS provided its wireless services for various indoor and outdoor locations before, during and after the live broadcast, in addition to the main stage show. Due to the extensive equipment requirements needed for the various components of the show, PWS once again worked with Bill Saltzer of East Shore Sound, an AV and integration company based in Jarrettsville, Maryland, to ensure that all the equipment needs were addressed. In all, PWS coordinated a total of 225 frequencies for the entire event.

“On an entertainment show of this size, it is essential that constant communication be maintained to ensure that all frequencies and elements of the music and technical production, including its associated broadcasts, are properly managed,” says Jim Van Winkle, general manager, PWS. “James Stoffo, the main RF coordinator, once again did a great job of managing all of the wireless microphones, in-ear monitors, wireless intercoms and IFBs with the assistance of the rest of the PWS crew to ensure that all wireless operations went off smoothly.”

For the pre-show red carpet activities, PWS supplied a comprehensive wireless systems package that included four Telex BTR 800 intercom systems, which ran through a PWS GX-4 Series combiner and DB-IC multicoupler, as well as an assortment of PWS Domed and Helical Antennas. In addition, 10 channels of Shure UHF-R microphones and six Lectrosonics IFBs were utilized.

For the main show, PWS employed 12 channels of the Shure Axient wireless microphone system along with the Shure PSM1000 personal monitor system. A host of Sennheiser, AKG, Sony and Shure UHF-R wireless microphones were also used for the main talent. This year, for the first time, five Radio Active Designs UV-1G systems with 25 belt packs were deployed for wireless intercoms. “Moving the bulk of communications in to the VHF spectrum freed up valuable UHF space for the wireless microphones and other UHF devices,” adds Stoffo. Additionally, Masque Sound’s headphone monitor system was utilized to ensure that all microphones were interference-free before hitting the stage.

As an additional challenge, PWS needed to once again accommodate the size of the video and lighting walls on the main stage. Plus, as the overall frequency count was at its highest on record for this show, there were multiple wireless positions for PWS to manage. It was imperative that the team maintain constant communication and work together to ensure that, despite any obstacles that could arise, the audio and communications for the show were perfect.

“In what is now our 16th year in providing our wireless expertise to this show, we are confident in our approach and always prepared to overcome any obstacles in order to deliver an interference-free, live broadcast,” concludes Van Winkle. “This year was another successful event for us, and I am very thankful to both the production crew at Telemundo and the PWS team members on this show and I would like to congratulate all involved on another successful year.”