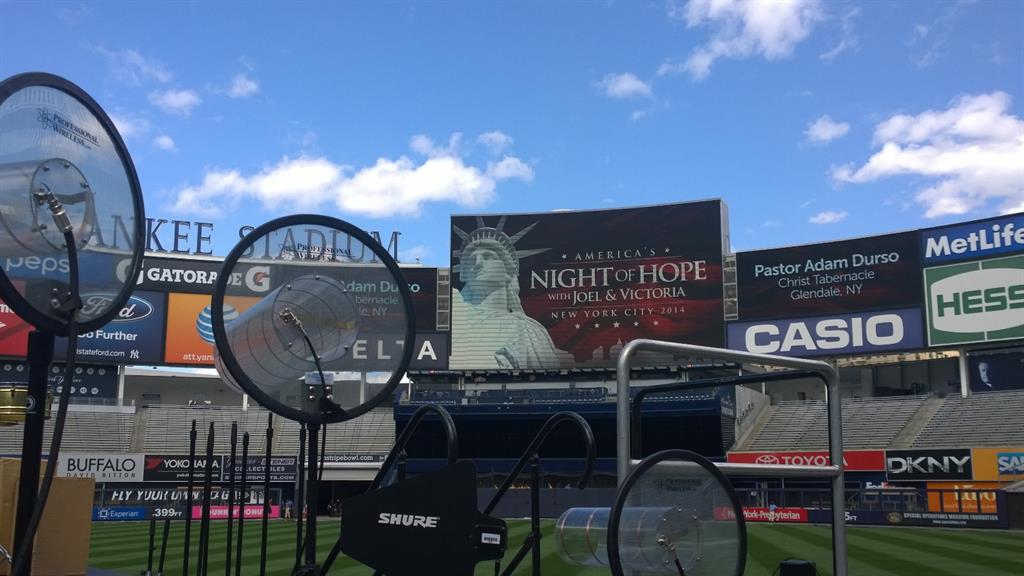 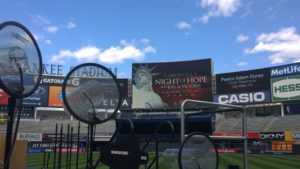 BRONX, N.Y.—When Joel and Victoria Osteen’s “Night of Hope” made its return to Yankee Stadium on Saturday, June 7, Professional Wireless Systems, a Masque Sound Co. and a specialist in supplying and supporting wireless systems for live and broadcast events, said it was on-hand to provide frequency coordination for the event. The company also complemented Joel Osteen’s equipment setup with a range of additional wireless solutions.

“Night of Hope” is an inspirational experience of encouragement, hope and worship. The two-hour event offers audience members words of encouragement from Victoria Osteen, a special testimony from Dodie Osteen and concludes with prayer and an inspiring message from Joel Osteen. This was the second time that the stadium housed the author and pastor. The Osteens’ motivational worship gathering in 2009 was the first non-sporting event at the new stadium.

In providing its wireless services for the outdoor broadcast, PWS managed a total of 115 frequencies and faced two main challenges. Not only did PWS need to survey the area to track down interfering ENG crews that were not coordinating with the show’s wireless frequencies, but the company also had to be on standby for inclement weather during the outdoor event, as sudden storms open the potential for dropped signals and channel interference. PWS provided exceptional service in its RF coordination, immediately locating all interfering sources and correcting any potential issues that may have arisen during the show’s broadcast.

PWS supplied and deployed a majority of its own equipment, including a combination of its domed and helical antennas, all running through its GX-8 combiners for transmission, in addition to its DB-IC Multicouplers for zoning and distribution. PWS relied on its Directional Finding Kit, along with a frequency counter and RF scanner to locate all frequencies. Tying everything together, PWS managed the show’s frequencies with its own Intermodulation Analysis Software System. IAS is a complete frequency management tool that helps coordinators quickly choose the clear frequencies for each specific wireless system and tuning range. Additionally, Telex BTR 800s were used for the show’s wireless intercoms.