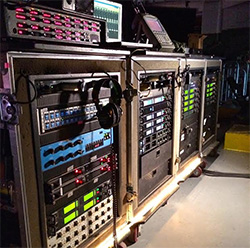 When the world’s biggest Spanish-speaking celebrities gathered in Miami for the 10th annual Premios Juventud awards show at the BankUnited Center, Professional Wireless Systems (PWS)  was once again backstage with a custom RF entertainment and intercom package to manage frequency coordination for the festivities.

Presented by Univision, Premios Juventud (Youth Awards) is an awards show that nominates Spanish-speaking celebrities to celebrate their artistic achievements in 27 unique categories within the areas of film, music, sports, fashion and pop culture.

In an interesting twist, the awards show asks the public to nominate their favorite singers, athletes and actors for award consideration and to then subsequently choose the winners through an online voting portal. Past winners include high-profile pop culture celebrities such as Shakira, Daddy Yankee, Antonio Banderas and Jennifer Lopez.

PWS has been providing equipment and handling wireless frequency coordination for the show since its inception in 2004. PWS managed a total of 130 frequencies for the main stage performances this year.

In order to ensure that there were no signal interference issues, PWS made use of a wireless package from Sennheiser, which included 3732-II receivers with 5200-II handhelds and 5212-II belt packs.

The crew also used a Shure Axient Wireless Management Network along with Shure PSM1000 in-ear monitors. PWS primarily selected the Shure Axient for the show’s artist presenters, as it is a comprehensive, innovative and fail-safe system with highly advanced planning, setup and control capabilities that make it a dependable product capable of combating any unforeseen challenges with ease.

“One of the biggest challenges we face when providing wireless for an event of this caliber is managing last-minute equipment changes, as many artists bring in their own mics and transmitters for the show,” says Evan Hall, PWS lead RF coordinator. “This is one of the primary reasons why we choose to rely on the Sennheiser 3732-II receivers and Shure Axient Wireless Management Network, because they are the only two products currently on the market that offer the entire spectrum range.

“With Sennheiser and Shure, we know that our crew will be adequately prepared to handle any artist equipment accommodations that may arise without repatching the entire system.”

PWS also supplied and deployed a number of Telex BTR-800s for its wireless communications as well as a majority of its own equipment, including a combination of its Domed and Helical Antennas, DB Series – Multicouplers, as well as GX-8 Combiners for intercom, IFB and in-ear monitors.

“We used 11 Telex systems, which presented quite a challenge, as it comprised more than half of our available spectrum,” adds Hall. “For this type of high-profile awards show, the wireless intercom system has to work on stage and off. We efficiently managed the large number of intercoms, along with all the other wireless equipment, with PWS’ GX-8s and DB-IC Multicouplers.”

Tying everything together, PWS managed the show’s frequencies with its own Intermodulation Analysis Software System (IAS). PWS’ IAS software cuts down on setup time by combining a database of wireless performance equipment and access to local television frequencies in use, allowing the RF technician the ability to simply enter the current zip code and, in a matter of moments, inventory the entire list of equipment and frequencies in-use.

“IAS is the building block to all of the productions that PWS works on, as it helps us to quickly choose the clear frequencies for each specific wireless system and tuning range,” adds Hall. “The PWS team once again did an amazing job; the show looked and sounded great.”