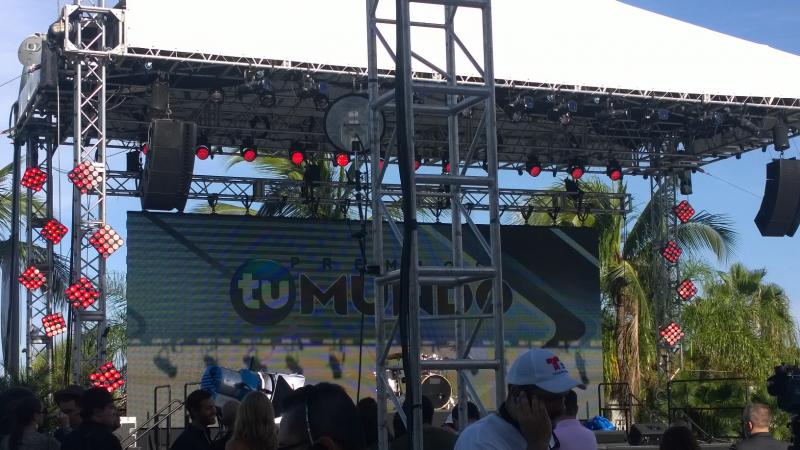 Premios Tu Mundo is an awards show that celebrates Latin pop culture and combines the power of television, web, mobile and social media platforms to give fans the final say in what’s hot in everything that moves and inspires them, including novelas, music, fashion, movies and sports. The red carpet pre-show featured celebrities such as Yandel, Juanes and David Bisbal, to name a few.

“Since the show’s inception three years ago, the PWS team has been providing a range of wireless equipment along with its expert frequency coordination services, and we are excited to be back once again,” says Jim Van Winkle, general manager of PWS. “Live broadcasts always present their own unique set of challenges, but, we are incredibly familiar with the American Airlines Arena and the Miami RF market, which offers us a significant advantage, as we can anticipate the general causes for concern during the show and remain on-guard and ready to solve any issues that may arise within the spectrum.”

During the Premios Tu Mundo festivities, PWS supplied the network with microphones, IFBs and wireless communications for the red carpet event and Telemundo’s morning show, Un Nuevo Día, which built up excitement for the show by broadcasting enticing promotional segments in the days leading up to the awards. The PWS team, including Evan Hall and Frankie Castro, offered their onsite support to Telemundo’s morning show. PWS also worked closely with Brooks Schroeder, the main RF coordinator during the event, and Chad Meise, along with John Garrido, handled frequency coordination for the red carpet.

For the live broadcast itself, PWS provided Shure Axient systems, Shure PSM 1000s, Shure UHFRs, Sennheiser 5200 Is, Telex BTR 800 wireless intercoms and IFBs, as well as a range of PWS’ Domed and Helical Antennas. PWS worked with Brooks Schroeder, who handled frequency coordination for the show, in addition to Acoutech, which provided the show with PA and monitor systems, microphones and in-ear monitors.

Throughout the duration of the live broadcast, PWS worked with Schroeder to monitor the event, continuously searching for unregistered wireless devices that posed the potential of frequency interference. “It is important to stay on top of who is using the spectrum and to ensure that everyone is in compliance so that there are no unexpected signal issues, especially since this is a live broadcast,” adds Van Winkle. “With our experience and expertise, the services we provide, along with the gear we select, allow us to find, isolate and minimize any potential problems that may arise, ensuring a smooth broadcast for the awards show’s multitude of listeners tuning in from their homes.”